What is Islamic Will and How Wealth Is Distributed? 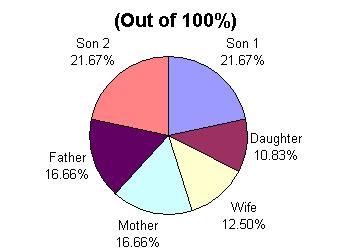 The concept of will or testament is defined as a mechanism by which any person decides his property or wealth to be divided after his death, to his family, children, relatives, or elsewhere. According to Sahih Al Bukhari, “It is the duty of a Muslim who has anything to bequest not to let two nights pass without writing a will about it”. This clearly explains the whole concept that if any person has some property or wealth then it is obligatory for him to make a will following Muslim law. When that person dies, his family can start the legal proceedings of the will. Importance of Islamic Will

Muslims need to learn and know more about the importance of Islamic will distribution, as it is considered one of the duties of Muslims.

Holy Quran tells us about different rights of every living thing, and Inheritance law is one of them. The Holy book clearly outlines the inheritance in three verses from chapter four. (Verse 11, 12, and 176). These verses provide all the details to the religious scholars of present times to use their logic to speak in a detailed way about this law. Following are some of the basic principle

Quran mentions that the first right on the will of the deceased one is of his close family members. Islam has set a fixed share for every member of the family which cannot be denied in any case during Islamic will distribution. The fixed ratio is calculated after the bequests and Islamic duties or responsibilities. The rights of family members are mentioned in the Holy Quran, which is why you cannot cut the name of any family member out of the will. The fixed family members include the spouse, daughter son, brother, sister, half-brother, half-sister, parents, and grandparents.

Sometimes the estate is left with some amount or balance after total computation is done for the fixed members. In this case, according to Islamic will distribution, the remaining balance is divided into distant relatives which includes uncle, aunty, nephews, nieces, or any other residual relative.

Since ancient times women were regarded as a part of the property as they were traded and shared among the man heirs. The eldest son had the authority to inherit all the property by cutting the other family members from the will. The Quran stopped these biased practices and made the process of Islamic will distribution even simpler by focusing on the degree of relations in the family rather than the man vs. women bias. According to Inheritance law, a woman gets a half share of what men get. While the changes in will and shares depend on the level of family relationships and the number of inheritors.

The Quran verse that specifies ‘a share for man equal to two women’ is put into practice if the children fall heir to the share after the deceased parents. In other cases, the shares are equally distributed to men and women.